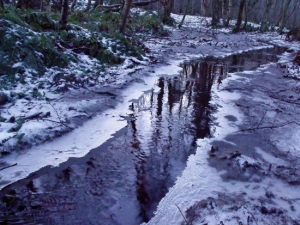 A frozen stream in the woods a couple of Solstices ago. Bleak or beautiful?

Christmas. Yule. A time of celebration, feasting, lights, sparkle and joy, rest and relaxation and all your favourite people, food and activities. Is it? Is that what it really is for you?

About seventeen years ago I was hugely pregnant with my daughter who was due on Christmas day. My GP told me he would be on call that day. I voiced the idea that surely that must be quite nice, I mean who would call the doctor out at Christmas except for the most dire of medical emergencies? He looked at me bleakly, and then dashed the whimsical, possibly pregnancy hormone influenced *snow outside, doctor warm by the fire with a glass of mulled wine* vision out of my head. (soundtrack to vision: 'chestnuts roasting on an open fire', played very mellowly on an antique grand piano)

His Christmas would begin at midnight when the elderly and infirm (who should not be out of their warm beds in the middle of the night, midwinter, Northern Scotland) started collapsing in church before, during and after Mass. The daytime was mainly filled with people who have conditions that negate the eating of rich foods and drinking of alcohol who were then suffering the various consequences of having done so.

But the evening was the worst. All day long family members who rarely see each other and like each other not at all had been suppressing their bitterness, gritting their teeth at Great Aunt Mildred's jibes and generally seething. By about 6pm things were breaking down. Literally. He was expecting nervous breakdowns, domestic violence, suicide, murder attempts and sobbing. Lots of sobbing.

People. It's not worth it. Think about the Christmas you really want and have it. Make it happen. It took me almost forty years to achieve it. Don't wait that long. It was scary. It faced opposition. I mean could it really be Christmas without 48 hours of food preparation for extended numbers of people? Without cleaning the house top to bottom early in the morning? Without having to get dressed up? Without bribing children to demonstrate orthodox ideas of good behaviour? Without complete exhaustion? Without having nearly bankrupted yourself to buy ridiculous amounts of presents for ridiculous amounts of ridiculous people who probably won't like them anyway? Umm…

It's so simple now. 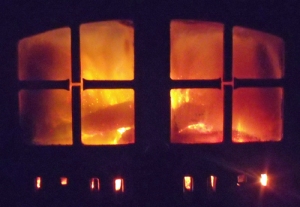 Authentic picture of the fire last Christmas Day 🙂 Snuggling up in front of it is so good, as are: normal quantities of good food; closeness with the people you cherish most; crap on telly and festively shaped chocolate. The beauty of midwinter is much easier to see in these conditions.

Of course some do thrive on stress… if that's you, well, great 🙂 If not… 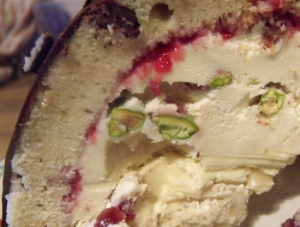 Ice Cream Bombe that was consumed on a perfect, peaceful Christmas. Recipe here (is very easy and can be made much in advance), extra preparation pics here.

Disclaimer: The Modern Housewife Series Vol I can take no responsibility for any consequences that come about as a result of following the advice above or discovering the Power of No. Wheedling phone calls of the 'we'll just pop in for a little while' ilk are not our fault. Conversations urging you not to streak naked through the woods are not our fault (fiction for humorous purposes of course, that one… err…)

The fact that putting your foot down over your Christmas may extend out into the rest of your life leading to much self authentication, joy and freedom? Again: all you.

4 thoughts on “in the bleak midwinter…”